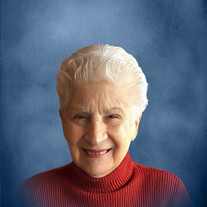 Yolanda Rita Nasuti (nee Fala), 93, passed away peacefully on April 20th, surrounded by her loving family. She was born June 14th, 1928 at Lankenau Hospital in the beautiful Wynnewood section of Philadelphia, to loving parents Alfonso and Carmela Fala. As a girl Yolanda attended church and school at 'Our Lady of Angels' Parish in the Italian section of West Philadelphia, followed by two years at a nearby trade school where she studied sewing. During her 2nd year Yolanda left to help financially support her family and began work 'on the line' at Whitman's Chocolates on 4th and Race Streets in Philadelphia. It's said, she was one of the fastest on the line, so when CEO Mr. Whitman came to visit her Supervisor always brought him to see Yolanda's work! At age 22 she met the handsome Daniel Ralph Nasuti and they married the following year. Thrifty as she remained, throughout her life, instead of renting she insisted they move in with Dan's parents in East Camden, NJ where they saved money and she honed her Italian cooking skills from her mother in-law Antoinette. Yolanda stayed on at Whitman's taking a bus to work until she was ready to start a family. As an aside, to this day only Whitman's chocolates are allowed in the Nasuti household, and even at that it must be the original 'Sampler' box! Dan and Yolanda bought their first home, a brick twin on 44th Street in Pennsauken, until their three daughters were young teens and they moved to her current home on Pettit Road where she's resided for 50+ years. As her girls grew, Yolanda worked part time for years at the former Rudy's Market on Cove Road in Pennsauken, and in the cafeteria at Pennsauken Middle School until she finally retired at age 85! While she and Dan traveled internationally, her favorite vacations were their annual weeks at the beach in Ocean City and Wildwood, NJ. Yolanda was simple, yet wise, the brightest of lights who was deeply cared for and loved by the hundreds who knew her - an extended family, many co-workers, neighbors and church goers. She is survived by her three devoted daughters, Norma (Lawrence) Costello, Verna (Karl) Dentino, and Miriam Nasuti (James Gavan); her grandchildren Lindsay (Frank) McDonnell, Lauren (Adam) Micciulla, Courtney Costello (Patrick Mandeville), Sean Costello (Ashley Dodson), Luke Dentino (Jessica Wilson), Hannah Dentino (Timothy Granick), Dominic Gavan and Connor Gavan; and four great-grandchildren. She is also survived by her younger brother, Albert Fala. She is preceded in death by her adoring husband Danny, her twin sister Angelina, and siblings Amelia, Edith, Eva, Francis and Louis. A viewing will be held Friday, April 29 at Inglesby Funeral Home, 2426 Cove Road in Pennsauken, NJ from 4 - 8 pm. A Mass of Catholic Burial will be held on Saturday, April 30th at 10 am, St. Peter's Roman Catholic Church, 43 W. Maple Ave, Merchantville, NJ. A Catholic Burial will follow mass at Calvary Cemetery, 2398 West Route 70, Cherry Hill, NJ. Flowers may be sent or in lieu of a donation can be made to one of Yolanda's favorite charities - https://www.stjude.org/promotion/impact-giving-pm.html?sc_dcm=58700007391419626&sc_cid=kwp&sc_cat=b&ds_rl=1291300&ds_rl=1285465&ds_rl=1290690&gclid=CjwKCAjwx46TBhBhEiwArA_DjDvu0LBsRwhU2prRHmDWhZRaLGi7p-hB4BRYsljR3eF0Hn15gXqbBhoC5bkQAvD_BwE&gclsrc=aw.d For online condolences: www.inglesbyfuneralhome.com

The family of Yolanda R. Nasuti created this Life Tributes page to make it easy to share your memories.

Send flowers to the Nasuti family.