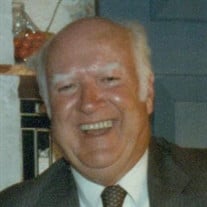 Walter E. “Bud” Rooney, 94, Cherry Hill, formerly of Pennsauken Bud passed away peacefully on February 3, 2016, surrounded by family. He leaves his wife of 56 years, Barbara (nee Barth), and his two daughters, Elinor DeStefano (Gregory) of Columbia, MD, and Lisa Wood (Harry III) of Maple Shade. Bud is the beloved PopPop of Brandon DeStefano (Colleen), Kristin Linde (Jason) both of Maryland, Harry Wood IV (Sara) of Pennsauken, and Patrick Wood of Maple Shade, and Great PopPop of Brynnley Wood. Survived by his sister-in-law, Sadie, one niece, Kathleen Silage, and nephews, Kenneth, Michael, and Timothy Rooney. Bud is also survived by his loving and faithful canine companion, Lucky. He is preceded in death by his parents, and brothers James F. and Richard T. Rooney. Born and raised in Burlington, NJ, to John and Marguerite (nee Parker) Rooney, Bud began his 42-year career in banking with Girard Bank in Philadelphia, working his way up from teller to Regional Vice President. He was a graduate of the American Institute of Banking, and was a member of several business organizations. Bud married the love of his life, Barbara, and they raised their two daughters in Pennsauken. An avid golfer, he was a member of Rancocas Golf Club and he played regularly with his brothers, friends, and his grandsons, whom he also taught. Bud was passionate about animal welfare, dancing, spending time with his family, his Irish heritage, and the Phillies and Eagles. He was an outdoor enthusiast, enjoying the beach in Sea Isle City, gardening, walking, and sunsets. In his retirement, Bud developed his artistic talent and won awards for his pieces. He was a volunteer for Virtua Hospital and the Cadbury Residents’ Association. Relatives and friends are welcome to visit on Monday evening from 7-9pm and on Tuesday morning for Bud’s life celebration from 10-12 at Inglesby & Sons Funeral Home, 2426 Cove Rd, Pennsauken. Interment will be private. Donations in Bud’s memory may be made to Animal Adoption Center, 501 Berlin Rd N, Lindenwold, NJ 08021 or visit www.aacnj.org. To post photos, share a memory, or send an online condolence, please visit www.inglesbyfuneralhome.com.

The family of Walter E. Rooney created this Life Tributes page to make it easy to share your memories.

Send flowers to the Rooney family.