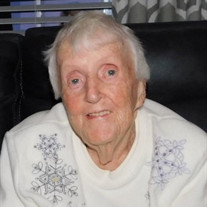 Uneeda Ann Perkins, age 89, of Camden, New Jersey, passed away on December 24, 2020. Uneeda, known as "Ann" or "Redsie", was a very strong person and lived alone until earlier this year when esophageal cancer affected her life. Her favorite things were talking on the phone, time spent with family, laughing and making others laugh, and attending Church and Bible Studies. Uneeda Ann was born to Thomas Jack and Ethel Beryl Coffman King in Rachel, West Virginia, on November 10, 1931. She was preceded in death by her parents Beryl Kaufman and Jack King, siblings Virgil (Geraldine) King, Brice King, Eva Kemp (Walt) and her twin sister, Edith (Alvin) Windstein. She grew up in West Virginia and moved to New Jersey when she was 19 years old. Ann married Albert E. Perkins, Sr., on February 1, 1951. He passed away on December 8, 1995. Ann is survived by her two children and their spouses, Albert E. (Carol) Perkins of Anamosa, Iowa, and George W. (Ramona) Perkins of Pennsauken, New Jersey. She is also survived by three grandchildren, Ben (Sarah) Perkins, Heidi (Andrew) Cross and Lisa (Juan) Bogran. Ann has nine great grandchildren, Amelia, Madeleine and Jacob Perkins; Lauren, Silas and Levi Cross; and Kaitlyn, Addison and Vanessa Bogran. She is survived by one sister-in-law Elizebeth King and many nieces and nephews. As her boys were growing up, Ann attended many sporting events. Her boys don't remember her missing any of their games. She enjoyed working with the East Camden Marauders and Rosedale Boys Club. A special time for the family was a week, most years, spent in Ocean City, New Jersey. Ann spent that time interacting with her grandchildren and great grandchildren. She also enjoyed many family gatherings at George and Mona's home. Ann helped with many events and enjoyed many friends at Hope Memorial Baptist Church in Camden, New Jersey. We appreciate all of the love and support she received from her Church family. Relatives and friends are invited to attend her visitation on Wednesday, December 30, 2020, from 9am-11am at Inglesby and Sons Funeral Home, located at 2426 Cove Rd., Pennsauken, NJ 08109. A funeral service will begin at 11am at the funeral home. She will be buried with family at Bethel Memorial Park Cemetery. In lieu of flowers, memorial donations can be made in Uneeda's name to MD Anderson Cancer Center at Cooper by visiting https://foundation.cooperhealth.org/cooper-campaign/md-anderson-cancer-center-at-cooper. Feel free to post photos, share a memory, or send an online condolences to the family.

Uneeda Ann Perkins, age 89, of Camden, New Jersey, passed away on December 24, 2020. Uneeda, known as "Ann" or "Redsie", was a very strong person and lived alone until earlier this year when esophageal cancer affected her life. Her favorite... View Obituary & Service Information

The family of Uneeda A. Perkins created this Life Tributes page to make it easy to share your memories.

Send flowers to the Perkins family.