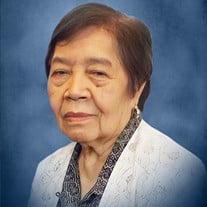 Teodora Flores ,age 97, of Pennsauken, formerly of Jersey City and Camden, passed away on Thursday, February 10, 2022 at Virtua Hospital, Voorhees, NJ. She was born in San Fernando, La Union, Philippines in 1925 to the late Marcos and Vincenta (Flores) DeGuzman. Teodora went to the University of Santo Tomas in the Philippines and was part of the 1st graduate nursing class in 1950, earning a Bachelor of Science degree in nursing. She became a registered nurse in the Philippines and later joined a nursing program that brought her to the United States, Jersey City and was a RN at Margaret Hague Hospital in Jersey City. She lived at Murdock Hall with other nurses. She met her late husband, Florentino Flores in the Philippines and kept a long-distance relationship with him, as they both moved to the US. She, as a nurse, and he, as a 3rd year mechanical engineer student. They eventually grew their relationship and moved to an apartment in Jersey City. They were married in 1962 and enjoyed 28 years of marriage until his passing in 1990. In their early days, they traveled all over the country, trying to visit as many states as possible. Teodora loved cooking and crocheting. She is predeceased by 11 siblings. She leaves behind, to cherish her memory, her sons; Edmund Flores and Nelson Flores and his wife Kristen, her grandson; Matthew T. Flores, as well as, her extended family in the Philippines. A visitation will be Tuesday, February 15, 2022 from 10:00am - 11:00am at Inglesby & Sons Funeral Home, 2426 Cove Road, Pennsauken, NJ 08109. A funeral service will begin at 11:00am at the funeral home. Interment will be private. In lieu of flowers, memorial contributions may be made, in Teodora's honor, to the Alzheimer's Association at www.alz.org and the Arthritis Foundation at www.arthritis.org. For online condolences, www.inglesbyfuneralhome.com

Teodora Flores ,age 97, of Pennsauken, formerly of Jersey City and Camden, passed away on Thursday, February 10, 2022 at Virtua Hospital, Voorhees, NJ. She was born in San Fernando, La Union, Philippines in 1925 to the late Marcos and Vincenta... View Obituary & Service Information

The family of Teodora Flores created this Life Tributes page to make it easy to share your memories.

Send flowers to the Flores family.