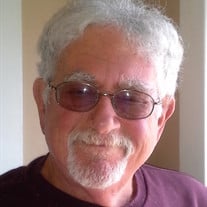 Robert Alan Miller died July 4th, 2017, at the age of 76. He was born in New York, lived a time in Clearwater, Florida with his parents and sister, and spent most of his young life in Astoria where he attended Stuyvesant High School and later earned his BBA in accounting at Pace College and MBA in finance and accounting from Bernard Baruch School of the City College of New York. He moved to Pennsylvania and later New Jersey, where he lived the past 16 years in Pennsauken. He is pre-deceased by his parents, Dr. George and Helen Miller and is survived by his wife of 29 years, Arlene, sister Marilyn Katzman (Joe Hall), daughters Gale Miller, Beth Steele and Suzanne Cronin (Doug), stepson Peter Andrew Kut (Donna), grandchildren Ryan Steele, Matthew Kut, Rachel and Molly Driscoll and Nicholas and Ella Zenatti, brother and sister-in law Gary and Pat Trojak, and nieces Lisa Koenig (Paul) and Jessica Larsen (Matthew), nephews Justin Katzman (Sheila) and Dan Trojak, and beloved fur baby TJ, his Bichon Frise. Bob was retired from Merck, where he spent ten years as Contract Manager for the Vaccine Division in West Point, PA. Prior to that, he was Corporate Controller for Lehman Brothers Bank, East Coast Corporate Controller for Konica Quality Photo East in Scarborough, ME, Regional Controller for Qualex, Inc. in Philadelphia, and Managing Partner and Vice President of Finance for Grundy Systems in San Diego. In the sixties, he was a part time DJ who developed an amazing memory for early rock and roll songs and groups and could recall the most obscure among them at a moment's notice. Bob, an avid golfer and sports fan, loved football, college and professional basketball and baseball. Aside from sports, he was a fantastic teller of jokes and had a great repertoire of favorites he told as often as he could to new friends (and with often-hysterical variations and embellishments, to old friends again as well). He was frequently asked to repeat punchlines for those who wanted to pass along his humor. That he died on July 4th is probably a perfect metaphor for his life. Bob was a real firecracker! He lit up the skies around him and made everyone he knew happy to be in his company. Sadly, he left us too soon but will be missed and remembered lovingly by all who were lucky enough to know him. And who really enjoy a great joke!

Robert Alan Miller died July 4th, 2017, at the age of 76. He was born in New York, lived a time in Clearwater, Florida with his parents and sister, and spent most of his young life in Astoria where he attended Stuyvesant High School and later... View Obituary & Service Information

The family of Robert Alan Miller created this Life Tributes page to make it easy to share your memories.

Send flowers to the Miller family.