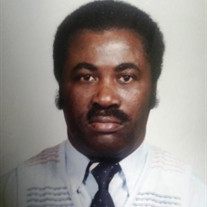 Napthalie A. Spence was born on April 19, 1936 in Kempshill Jamaica, to the late George Spence and Cinderella White. Napthalie, most affectionately known as Bobsie, worked at the Moneymus Estate as a tractor operator until he moved to Montreal Canada in 1970. In 1971 he married the love of his life, Autrey Spence. Bobsie and Autrey celebrated forty-eight years of marriage until his passing on May 26, 2019. Bobsie and Autrey raised five boys, Tony, Ted, Gary, Dave, and Bryan. He had one daughter Anne-Marie Spence and host of grandchildren. Bobsie was a avid sports fan and was devoted to being home at 7:30 each night, no matter what, to watch his hockey games. His second passion was music. Bobsie' s record collection was vast and he loved listening to the sounds of reggae to brighten his spirits. Bobsie moved to the United States after he retired from Future Electronics as an electrician for eighteen years. In the ladder part of his life, Bobsie developed a special bond with his in-laws and extended family. Everyone referred to him as uncle Bobsie and enjoyed listening to his life stories and sarcastic jokes. Even in illness, he found a way to make those around him smile. He had a loving soul and appreciated everyone's sincere compassion. Bobsie was a role model to both the young and the old. He lived a life that fully aligned to his values of family, commitment, and perseverance. He will never be forgotten and those left to cherish his memories are his brother Eddie Spence, his sister Caro Spence, his wife Autrey Spence, three boys, Tony, Ted, and Bryan, his daughter Anne-Marie, and a host of grandchildren, nieces, and nephews.

Napthalie A. Spence was born on April 19, 1936 in Kempshill Jamaica, to the late George Spence and Cinderella White. Napthalie, most affectionately known as Bobsie, worked at the Moneymus Estate as a tractor operator until he moved to Montreal... View Obituary & Service Information

The family of Napthalie A. Spence created this Life Tributes page to make it easy to share your memories.

Send flowers to the Spence family.