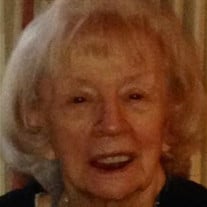 Mary T. Curry (nee Geoghegan), age 85 formerly of Pennsauken and Moorestown passed away Monday, April 11th at Collingswood Manor after an extended battle with Alzheimer’s disease. Born in and raised in Pennsauken, Mary was the daughter of Raymond and Lillian. She graduated from Camden Catholic in 1948. In 1954, Mary married a handsome former US Marine James (Jim) after which they settled in Pennsauken and resided for 28 years. Mary worked various jobs including the Pennsauken Court, Boise Cascade, Lee Needle Art and ultimately Subaru of America where she retired as Supervisor of Inventory Accounting. Mary was an original member of the “The Jocund’s Girls Club”, a group of high school girls which turned into a lifelong membership of fun, food and frivolity. Mary and Jim were charter members of the Camden Catholic Wrestling booster club. She enjoyed dining out, dancing, the casinos and spending time with her husband, three children and seven grandchildren. For the last 22 months, Mary resided at Collingswood Manor where the 5th floor staff took incredible care of her and kept her comfortable and at peace until the very end. Prior to this time she was cared for by Senior Friends of Collingswood who cared for both her and Jim at their residence in Moorestown. Mary was predeceased by Jim, her husband of 59 years. She is survived by her three children, daughter Janice (Edward) Curry-Lambert and sons James, and Raymond (Deborah). She was the loving grandmother of Kurt, Shannon, Julianne, Rosemarie, Jim, Will and Erica. Dear sister to Rita Nardi and the late Helen Heisler. She is survived by sister-in-law’s Thelma Koopman, Arlene Marshall (Joseph), June Moore and brother-in law, Anthony Curry (Judy). She is survived by former daughter-in-law Nancy Curry as well as many nieces and nephews. Relatives and friends of the family are kindly invited to attend her visitation Monday, April 18th from 7:00pm-9:00pm and Tuesday, April 19th from 9:00am-10:00am at Inglesby & Sons Funeral Home, 2426 Cove Road, Pennsauken, NJ 08109. Mass of Christian Burial will be 10:30am at Mary, Queen of All Saints Church, Pennsauken; Interment will follow at Calvary Cemetery, Cherry Hill. In lieu of flowers donations may be made in Mary’s name to Camden Catholic High School, 300 Cuthbert Blvd., Cherry Hill, NJ 08002, The Alzheimer's Foundation of America, 322 Eighth Ave. 7th fl., New York, NY 10001, or Collingswood Manor at 460 Haddon, Ave, Collingswood, NJ 08108.

Mary T. Curry (nee Geoghegan), age 85 formerly of Pennsauken and Moorestown passed away Monday, April 11th at Collingswood Manor after an extended battle with Alzheimer&#8217;s disease. Born in and raised in Pennsauken, Mary was the daughter... View Obituary & Service Information

The family of Mary T Curry created this Life Tributes page to make it easy to share your memories.

Send flowers to the Curry family.