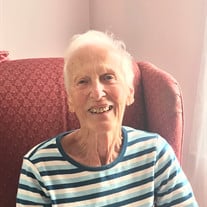 Margaret (Peg) Skalski Paulino, 84, of Pennsauken, passed away peacefully on Wednesday, October 6, 2021 at her home in Pennsauken. She was born on October 20, 1936 in Philadelphia, PA where she was raised by her parents, the late Edward and Wilhelmina (Frick) Farrington. She moved to Pennsauken in the 1980's, where she resided until her passing. Margaret was a past member of St. Bartholomew's Episcopal Church in Philadelphia and St. John's Episcopal Church in Maple Shade, NJ. She obtained her Registered Nurse Degree at Episcopal Hospital in 1957 and spent her career there as an OR nurse until her retirement. She was an active member of the Episcopal Hospital Alumni Association, serving in several roles including President and Vice-President of the Alumni Association. After retiring, Peg enjoyed serving her community as a volunteer in such places as Pennsylvania Hospital in Philadelphia and St. Stephen's Preschool in Pennsauken. She also assisted in community outreach at St. John's, serving Sunday morning breakfasts to the needy as well as helping to run the thrift shop. Peg was an avid reader and loved to travel when she was able. A social butterfly, she was well known by many and made a lasting impression on everyone she met. A dedicated mother and grandmother, she loved nothing more than spending time with family. Besides her parents, Peg was predeceased by her former husband, Stanley Skalski and her second husband, Anthony Paulino, as well as her siblings Louise Porterfield, Corrine Kelly and Dorothy Karwoski. Peg is survived by her children; Lynn Skalski (William), Lee Rader (Anthony), and Andrew Skalski; her grandchildren Olivia, Liam, Tessa and Jacob; her brothers Edward and Robert Farrington; her sister Julie Uchniat, and many nieces, nephews, cousins and friends. A visitation will be held Thursday, October 14, 2021 from 10:00 am - 12:00 pm at Inglesby and Sons Funeral Home, 2426 Cove Road, Pennsauken, NJ 08109. A funeral service will follow at 12:00 pm at the funeral home. Cremation will be private. In lieu of flowers, memorial donations may be made in honor of Peggy to the Alzheimer's Association at alz.org

Margaret (Peg) Skalski Paulino, 84, of Pennsauken, passed away peacefully on Wednesday, October 6, 2021 at her home in Pennsauken. She was born on October 20, 1936 in Philadelphia, PA where she was raised by her parents, the late Edward and... View Obituary & Service Information

The family of Margaret Skalski Paulino created this Life Tributes page to make it easy to share your memories.

Send flowers to the Skalski family.