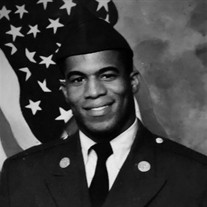 Marc H. Williams, age 40, was born in Bronx, New York on December 10, 1978. His parents, Zona and Winston Williams were elated with joy at the birth of their vibrant son. Even from a very young age, Marc knew how to leave a lasting impression on everyone he encountered. Marc was fearless growing up. He loved sports and was often seen running up and down the city blocks of New York with his friends. At the age of eight, Marc moved to New Jersey to live with his Aunt Carmen where he attended the Pennsauken school system. During his scholastic years, Marc discovered a passion for Track and Field. He was fast, determined, and extremely competitive in 100, 200, and 400 hurdles. Upon his graduation from Pennsauken High School in 1997, he made the commitment to join the United States Army. While in the Army, Marc initially moved to Texas before serving many years overseas. He was always excited to get home in between terms and would make it his duty to see all of his friends and family. He received a honorable discharge and moved back to New York City. Upon his return, Marc became a phlebotomist at Montifore Hospital. He was known as the tech that could draw blood from a cactus. During that time, Marc became a father to his only child, Khajon Williams. Marc was a stellar father and ensured his son had the best of everything. Khajon was his protégé and Marc did everything to set him up for success. In 2011 Marc met the love of his life, Mitzie Duncan (also known as Ann), in Top Hill, Jamaica. Marc and Ann were inseparable and officially became a married couple on July 13, 2015. Marc loved Anne and it was evident, Ann loved and adored him through thick and thin. They were a team and created a loving household for Khajon. Marc departed this earth to join his heavenly father on October 31, 2019. He was in the midst of completing his degree in pursuit of becoming a nurse. Marc was a loving son, brother, nephew, and father. He leaves to mourn his wife Ann Williams, his son Khajon Williams, his mother Zona, father Winston, five brothers Michael, Kemarley, Rhamel, Richard, and Kirk, four sisters Stephanie, Christine, Angie, and Amanda, his extended siblings Richie, Ryan, Andrew, and Jamie, along with a host of nieces, nephews, aunts, uncles, and cousins.

Marc H. Williams, age 40, was born in Bronx, New York on December 10, 1978. His parents, Zona and Winston Williams were elated with joy at the birth of their vibrant son. Even from a very young age, Marc knew how to leave a lasting impression... View Obituary & Service Information

The family of Marc H. Williams created this Life Tributes page to make it easy to share your memories.

Send flowers to the Williams family.