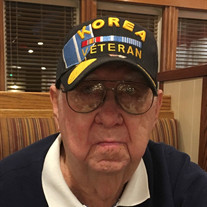 Joseph D. Bennett, age 91, of Southampton, NJ, passed away peacefully on February 1, 2022. He was born and raised in Pennsauken, NJ to the late Thomas and Lillian (Brimecomb) Bennett. Joseph proudly served in the US Air Force during the Korean War. He was previously employed as a draftmans for NDI for many years. Joseph enjoyed golfing, fishing and working on his project cars, even up to the time of his passing. His cars were always kept immaculate. Joseph was a devout Catholic and was a former Altar Server at St. Cecelia's Church as well as a Third Degree Knight of the Knights of Columbus. A man of many talents, he designed, built, and articulated model airplanes from scratch and was a member of the Silent Flyers Club of South Jersey. Joseph loved working with his hands whether it was remodeling his home or building a Mercedes engine. He will be remembered for his humble, intelligent, and generous nature. Joseph will be deeply missed Joseph is predeceased by his wife, Ann Marie; son, Sean Bennett; brother, Thomas Bennett; and sister, Marita Prickett. He is survived by his daughters, Gerry Bennett and Jo Ann Bennett; grandchildren, Erin Kerner (Ian), Brian Elmes and Meaghan Bennett (Chris); and great-grandchildren, Sebastian Kerner, Ella Kerner, Sophia and Hailey. Family and friends are welcomed attend a Mass of Christian Burial on Tuesday, March 8, 2022 at St. Peter Church, located at 43 W. Maple Ave., Merchantville, NJ 08109. Joseph will be laid to rest a Brigadier General William C. Doyle Veterans Memorial Cemetery following Mass. In lieu of flowers, memorial donations can be made to The Korean War Veterans Association by visiting kwva.us and/or to Vehicles for Veterans by visiting vehiclesforveterans.org.

Joseph D. Bennett, age 91, of Southampton, NJ, passed away peacefully on February 1, 2022. He was born and raised in Pennsauken, NJ to the late Thomas and Lillian (Brimecomb) Bennett. Joseph proudly served in the US Air Force during the Korean... View Obituary & Service Information

The family of Joseph D. Bennett created this Life Tributes page to make it easy to share your memories.

Send flowers to the Bennett family.