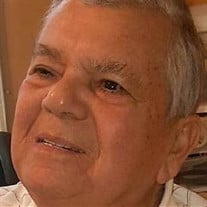 Jose Meléndez (Chéo) was born in Pattillas, Puerto Rico to Maria Cristina and Juan Meléndez. He was one of 17 children, Zaida Meléndez, Juan (Chiquito) Meléndez, Carmen Ana Meléndez, Maria Cristina Meléndez, Juan (Johnny) Meléndez, Marta Meléndez, Awilda Bonilla, Aida Bonilla and Carmen Flores, 8 of whom preceded him in death. Chéo was orphaned at an early age and moved to New York with his Tia “Mode” and Tio Isabel. Chéo met his one and only true love Anaida in New York City and in 1961 they were wed; from that union 3 children were born, Annette, Anaida, and Ricardo. In 1962, they welcomed their first daughter Annette. In 1964, Chéo ventured from New York City to Philadelphia so he can better provide for his family. Once he was stable, he sent for hisé wife and daughter. In 1966, he brought his first home for his family, and welcomed his second daughter Anaida, Jr. During his lifetime, Chéo began to invest for his family, he flipped real-estate, was a certified Tax Specialist and opened a home office to file taxes. He worked full time, however, he never neglected his family. His first job was at a factory on 2nd and & Race, making pocketbooks. Then he began working as a landscaper with Mr. Green. Mr. Green loved Chéo and his brother Johnny, he always encouraged them to do well in life. Chéo knew that he wanted more for his family by applying his skills and he was going to lead by example so he decided to go back to school at night and acquire his High School Diploma. He also achieved a diploma from the Lincoln Technical Institute. Chéo worked as a Supervisor for 15 years at Progress Lighting, there he learned how to build Tiffany lamps. He was loved by all who met him. Chéo not only learned the trade, he brought it home and taught his daughters. There was nothing he could not do, and the words “I can't” were never in his vocabulary. In 1977,they welcomed his third child Ricardo. In 1991, Chéo, his wife, and his son Ricardo moved to Pennsauken, New Jersey, where he worked at Magnetic Metals as a Supervisor, until his retirement in 2002. Chéo lived a full life with his family; he believed in vacations. He made sure that his family went away on the weekends and traveled to many different destinations in the world, he also loved to go on cruises. He was determined to provide for his family and to make sure they had everything they wanted and needed. If there was something that Chéo wanted, he did everything in his power to achieve it. He taught himself and others to play the guitar. Once he arrived at someone's house all he had to do was pick up the guitar and before you knew it there was a party going on. Chéo made one of the most important decisions in his life on Father's Day, Sunday, June 19, 2016, he accepted Jesus as his Lord and Savior at Harbor Baptist Church. He was so excited that day and full of new life. When he saw someone he would say: “Yo me entrege” which to him meant that he had repented all of his sins to the Lord and accepted the free gift of salvation that is offered to all of us. He was washed of all the murk from his soul and made a new man. One by one as visitors arrived at his home he was ministering to them, saying the only road is with God, love your family and go to church and celebrate life. Chéo touched so many lives while at the hospital in his final days telling anyone who would listen about the good news of Jesus. He leaves to cherish the memories of his life his wife of 55 years, Anaida, his daughters, Annette, wife of Sylvester Freeman; Anaida, wife of Edgar Torres; son Ricardo, husband of Gloria Bonilla; 10 grandchildren; Angelica wife of Alan Salas, JR, Jennifer, Adriana, Bianca, Joey, Brianna, Berito, Ricardo Jr., Mariana, and Alicia; 7 great-grandchildren; Hannah, William, Jacobi, Jayden, Isabella, Sophia, and Olivia; and a host of brothers in-law, sisters-in-law, nephews, nieces, family and friends.

The family of Jose Melendez created this Life Tributes page to make it easy to share your memories.

Send flowers to the Melendez family.