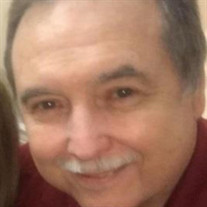 John Jeffrey Walter, 71, of Pennsauken, passed away peacefully on Saturday, December 4, 2021 at Virtua Marlton Hospital. He was born in Urbana, OH in 1950 to the late Kenneth and Marjeanne (Lafferty) Walter. He was a longtime resident of San Jose, CA and relocated to Pennsauken, NJ in 2006. Jeff, as he was known, was a serious gamer, he met his wife Pamela Habingreither while playing the online game, World of Warcraft, when she asked him for directions and he came to her aid. They fell in love and were married in Pennsauken, in 2007. Jeff and Pam have happily enjoyed 14 years of marriage. His brother in law, Michael, quoted these words, "If you didn't like Jeff, there is something wrong with you!" Jeff was a kind and happy guy, he would brighten any room with his positive energy. He was even written up, one time, for being too nice to his customers, which gave all a good laugh. He loved history and majored in it, in college. He was also a big sports fan, he loved the San Jose Sharks, the Philadelphia Eagles and watching random rugby matches. He had multiple jobs in his career, but none made him prouder, than being a manager in the Burger King Corporation. Besides his parents, Jeff is predeceased by his stepson; Richard John Garber II. Surviving are his wife, Pamela Smith-Walter, his sons; Jeffrey Kenneth Walter and his wife Esthela and Joseph Mercedes Walter and his wife Michelle, his sister; the Honorable Charlotte Woolard Walter and her husband Leonard, his step daughter; Samantha Crespo and her husband Stephen, his step daughter in law; Laura Huhn-Garber, his grandchildren; Tristan, Sebastian and Mason and his step grandchildren; Madison, Aidan, Grayson, Oliver, Travis, Mabel and Brynn. He was lovingly known as Papa to his special boy; Ryder Laning. Cremation will be private. In lieu of flowers, memorial contributions may be made, in Jeff's honor, to the Parkinson's Foundation at Parkinson.org. To share online condolences, please visit www.inglesbyfuneralhome.com

John Jeffrey Walter, 71, of Pennsauken, passed away peacefully on Saturday, December 4, 2021 at Virtua Marlton Hospital. He was born in Urbana, OH in 1950 to the late Kenneth and Marjeanne (Lafferty) Walter. He was a longtime resident of... View Obituary & Service Information

The family of John Jeffrey Walter created this Life Tributes page to make it easy to share your memories.

Send flowers to the Walter family.