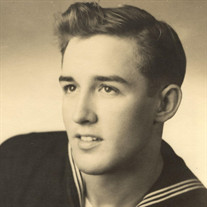 John Thomas Oliver, AIAE, age 91, of Mt. Laurel, NJ, passed away peacefully on March 1, 2018. He was born in Haddonfield, NJ on May 16, 1926. John became an Eagle Scout Troop 60 in 1941. He graduated from Haddonfield Memorial High School Class of 1944. After high school, John enlisted in the US Navy during World War II and trained at Camp Perry in VA. He served on board the U.S.S New York in the campaigns of Iwo Jima and Okinawa. In 1946, he entered the field of Architecture and became registered in 1962. John was a member of The American Institute of Architects, The New Jersey Society of Architects, and The West Jersey Society of Architects where he served as President in 1965 and 1966. He was a member of the Pennsauken-Merchantville Rotary Club for 25 years and served as President in 1965. John was a member of the Collingswood Cloud Lodge 101 FandAM and Lodge Council Chapter Consistory Scottish Rite. He was a member of the Maryland Geneological Society and Geneological Societ of Pennsylvania. He was one of the original 5 founders of the Griffith Morgan House Restoration Committee. He was the beloved husband of Gloria Oliver (nee Padalino). John is survived by his children, Jamie Ann Oliver (Robert Jordan) of Tabernacle, NJ, Catherine Marie Oliver (Christopher Genievich) of Pittsgrove, NJ, and Dana Marie Oliver of Burlington, NJ; grandchildren, Allec Ray Johnson, Jacob Corsair Jordan, Paige Ann Genievich, and Jack Michael Genievich; and many nieces and nephews. Relatives and friends are invited to attend his memorial gathering on March 7, 2018 from 7pm-9pm and March 8, 2018 from 9am-10am at Inglesby and Sons Funeral Home, located at 2426 Cove Rd., Pennsauken, NJ 08109. A funeral ceremony will be held on March 8, 2018 at 10am at the funeral home. John will be laid to rest with Military Honors at Brigadier General William C. Doyle Veterans Cemetery in Wrightstown. In lieu of flowers, memorial donations can be made to Shriners Hospitals for Children by visiting www.shrinershospitalsforchildren.org. To post photos, share a memory, or send an online condolence, please visit www.inglesbyfuneralhome.com.

The family of John T. Oliver created this Life Tributes page to make it easy to share your memories.

Send flowers to the Oliver family.