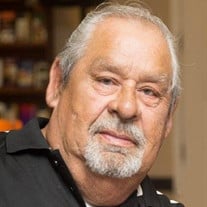 John Jacob Mertz Sr., 76, died on Tuesday, February 2, 2021 at Our Lady of Lourdes Hospital. In the end, he died the same way everyone dies, "lack of breath." A life of 76 years with a legacy such as his is full of stories and memories. He... View Obituary & Service Information

The family of John Jacob Mertz, Sr. created this Life Tributes page to make it easy to share your memories.

Send flowers to the Mertz family.