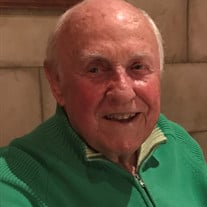 Jack B. Mitchell, 92, long time resident of Pennsauken, passed away peacefully at home with his family on June 13, 2020. Jack was born in 1928 in Beverly, N.J. to Joseph Mitchell, a barbershop owner, and Viola Burr, homemaker. He was raised in Beverly, and served in the U.S. Army in Korea as an MP. Upon discharge, Jack attended Pierce Business School in Philadelphia on the GI Bill, graduating with a degree in Accounting. He married Jean T. Barnes in 1953, settled in Pennsauken, and worked in Philadelphia as an accountant for manufacturing enterprises. Jack moved into hospitality management with positions at the Mallard Inn in Mount Laurel, as General Manager at the Golden Eagle Inn in Wildwood, and the Grand Hotel in Cape May. The final chapter of Jack's career was as a real estate agent for Century 21, Prudential Lamplighter, and Lamon Associates. He worked until the age of 82 and instilled a dedicated work ethic in his children. Jack is predeceased by his wife Jean B. Mitchell, a longtime teacher in the Pennsauken school system, and is survived by four children and their spouses: Kim Mitchell (Ralph Abreu), Kathy Stello (Ralph), Keith Mitchell (Milissa), and Kyle Mitchell (Pam) and five grandchildren: Jacqueline and Anjelica Mitchell, Julian and Rory Stello, and Nicolas Abreu. Jack was passionate about his family and many longtime and new friends, Ocean City, the Eagles and Phillies, politics (as a true blue Democrat he was a fan of Mario, Andrew, AND Chris Cuomo), CNN, Frank Sinatra, and Barbra Streisand. Upon his retirement, he and Jean traveled to Ireland, England, and many destinations in the United States. After Jean's death in 2014, he continued to live independently, maintained an active social life and daily fitness workouts, and belonged to the St. Peter Senior Ministry in Merchantville. Graveside service will be held on Saturday, June 20 at 11 a.m. at Arlington Cemetery at 1620 Cove Road in Pennsauken. In lieu of flowers, memorial contributions may be made to the Innovations in Cancer Research Fund, 3535 Market St., Suite 750, Philadelphia, PA 19104, . To post photos, share memory, or send an online condolence, please visit www.inglesbyfuneralhome.com.

Jack B. Mitchell, 92, long time resident of Pennsauken, passed away peacefully at home with his family on June 13, 2020. Jack was born in 1928 in Beverly, N.J. to Joseph Mitchell, a barbershop owner, and Viola Burr, homemaker. He was raised... View Obituary & Service Information

The family of Jack B. Mitchell created this Life Tributes page to make it easy to share your memories.

Send flowers to the Mitchell family.