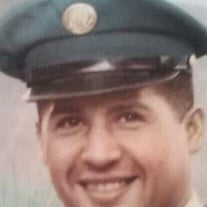 Frank Feliciano, age 75, of Hatillo, PR, passed away peacefully on Wednesday, November 8, 2017 surrounded by family. He was born to the late Francisco Feliciano Arvelo and Ramona Caban Pagan in Lares, Puerto Rico. Frank spent 35 years in the automotive industry rising to the level of Sales Executive. In 2011, he retired to his beloved Puerto Rico where he was able to finally relax and enjoy his favoite pastime of fishing as he was the consummate outdoorsman. Frank was predeceased by his siblings, Marceliano, Diego, Alfredo, Olga, Bienvenida, and Felicita Feliciano. He is survived by the mother of his children, Angelica Perez; his daughters, Yvonne, Yvette (Richard), and Ynnette (Jay); grandchildren, Richard, Dominic, and Alberto Jr.; and a host of nieces and nephews. Relatives and friends are invited to attend his visitation on Monday, November 13, 2017 from 6pm-8pm at Inglesby and Sons Funeral Home, located at 2426 Cove Rd., Pennsauken, NJ 08109 and on Tuesday, November 14, 2017 from 9am-9:45am at Cathedral of the Immaculate Conception, located at 642 Market St, Camden, NJ 08102. A Mass of Christian Burial will be celebrated on Tuesday at 10am at the church. Entombment to follow at Calvary Cemetery in Cherry Hill. In lieu of flowers, memorial donations can be made to Somos Una Voz by visiting somosunavoz.com and/or by sending a Mass Card for a Roman Catholic Mass to be said in Frank's memory. To post photos, share a memory, or send an online condolence, please visit www.inglesbyfuneralhome.com.

The family of Frank Feliciano created this Life Tributes page to make it easy to share your memories.

Send flowers to the Feliciano family.