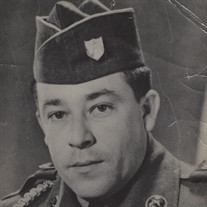 Fernando Fernandez, age 96, of Camden, passed away peacefully on Friday, August 26, 2016 surrounded by his loving family. He was born on May 20, 1920 in Cesar, Puerto Rico; Fernando realized that jobs were few in Puerto Rico, during the depression, he enlisted in the United State Army in December of 1940; the young soldier went to battle for the United States serving in World War II and shortly thereafter fought in the Korean War. He was served with the Borinqueneers Company I 65th Infantry. In 1958, Fernando was discharged from the United States Army after having received a multitude of medals; Combat Infantry Badge, American Defense Service Medal, American Theater Service Medal, European African Middle Eastern Theater Service Medal with 3 Bronze Stars, Good Conduct Medal, Overseas Service Bars, and WWII Victory Medal. In 1960, Fernando and his late wife Hermenegilda and their four children migrated to Camden, NJ to live with family. He began working for the City of Camden as a trash collector and within 3 years he purchased a home of his own for his family. Fernando always worked to take care of his family. His family will remember him as a punctual man who loved to pray, read his bible, and keep himself busy with various household chores. Most of all, Fernando was a proud American and Veteran who loved his country. He is predeceased by beloved wife, Hermenegilda Fernandez and his parents, Pedro Fernandez and Domitila Rivera. Fernando is survived by his children, Juan Fernando Fernandez, Nilda E. Torres and son in law Howard J. Torres, Pedro Angel Fernandez, and Jose A. Fernandez; grandchildren, Neida Fernandez, Awilda Morales, Elsie Torres, Anita Fernandez, Joan Fernandez, John Fernandez, Mildred Fernandez, Elibeth Fernandez, and Jose Fernandez; great grandchildren, Alicia Rodriguez, Brianna Watkins, Zaiya Evans, and Rubie Rose Santiago. Relatives and friends are invited to attend his visitation on Wednesday, August 31, 2016 from 9am to 10:30am at Funeraria Hernandez, located at 2426 Cove Rd., Pennsauken, NJ 08109. A funeral ceremony will begin at 10:30am at the funeral home. Fernando will be laid to rest at Harleigh Cemetery in Camden. Feel free to post photos, share a memory, or send an online condolence to the family.

Fernando Fernandez, age 96, of Camden, passed away peacefully on Friday, August 26, 2016 surrounded by his loving family. He was born on May 20, 1920 in Cesar, Puerto Rico; Fernando realized that jobs were few in Puerto Rico, during the depression,... View Obituary & Service Information

The family of Fernando Fernandez created this Life Tributes page to make it easy to share your memories.

Send flowers to the Fernandez family.