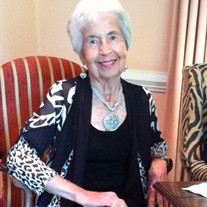 Mrs. Edith Ferris, 93, passed away on July 17 at Edenton Retirement Community, Frederick, Maryland. Born on December 29, 1924, she was the daughter of the late Arthur H. Paul and Frances Gillan Paul. She was the wife of William B. Ferris, who preceded her in death in 2016. Edith was a beautiful wife, mother, grandmother, neighbor, parishioner, helper, friend admired by many for her quiet grace. Edith was adventurous. She practiced yoga when most people still thought it was something you ate, enjoyed horseback riding and went back to school in an era when no one did that. Mrs. Ferris was a traveler, both armchair and voyager, visiting many cities and countries. She ran her father's business at 18 after his sudden death and WWII called her brother away. Mrs. Ferris was also a real estate agent and later the manager in a medical publishing company where she retired. Edith was a lover of good food, ballet, art and conversation around the dinner table. Edith was a devout Catholic who embodied the true spirit of the faith in her everyday life. She was an amazingly voracious reader whose love of the printed word she passed to her children and grandchildren. Generous to a fault, both Edith and Bill shared their table, their homes at the beach, goodwill and much more with others. In Avalon, NJ, Edith dove into community life and helped with Senior citizens, the landscaping, and much more for over 25 years, and The Garden Club honored her for her 25 years of service. She was the beloved wife of William, who loved nothing more than to surprise her with amazing celebrations for her key birthdays and always seemed to delight in the festivities. Mrs. Ferris is survived by her daughters, Michele Ferris Hansen and Maureen Pepson (David); a son Michael Ferris (Gail) and her grandchildren, Erik Hansen, Michael Pepson and Jen Pepson Elwood (Jon). The family sends special thanks to Edenton Retirement Community and the caregivers who made our mother's last days so peaceful. In lieu of flowers, please send donations to Hospice of Frederick County, PO Box 1799, Frederick, MD 21702. A memorial gathering will be held from 11am-11:30am on Friday, July 27 at Inglesby and Sons Funeral Home, located at 2426 Cove Rd., Pennsauken, NJ 08109. A memorial service will begin at 11:30am at the funeral home. Inurnment will be with her husband in Calvary Cemetery, Cherry Hill, NJ.

Mrs. Edith Ferris, 93, passed away on July 17 at Edenton Retirement Community, Frederick, Maryland. Born on December 29, 1924, she was the daughter of the late Arthur H. Paul and Frances Gillan Paul. She was the wife of William B. Ferris,... View Obituary & Service Information

The family of Edith A. Ferris created this Life Tributes page to make it easy to share your memories.

Mrs. Edith Ferris, 93, passed away on July 17 at Edenton Retirement...

Send flowers to the Ferris family.