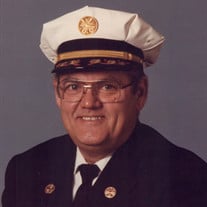 Chief Ret. E. Blair Hutton, 87, of Pennsauken, passed away on September 18, 2016. Beloved husband for 63 years of the late Doris (nee McGrory); Devoted father of James (Catherine); Proud grandfather of Jamie (Thomas, Jr.), Jonathan (Jaclyn Singer), Joseph and the late James David; Adoring great grandfather of Thomas, III and Micki; Cherished father in law of the late Micki (nee Frost); Dear brother of the late Barbara Peterson; Also survived by many loving step grandchildren, nieces and nephews. Prior to retirement, Mr. Hutton was the superintendent of operations at Advertisers Press Inc. in Philadelphia and also owned and operated E.B. Hutton Electric. A proud US Army Veteran serving from 1950 to 1953 during the Korean War, he attained the rank of Corporal and was awarded 4 Battle Stars. He was a member of many veterans associations, including American Legion Post 372 in Cherry Hill and Post 101 in Delair, the Korean War Veterans Association and the VFW Post 1270 in Pennsauken, where he was Post Chaplin and Canteen Manager. Blair joined the Bloomfield Park Fire Co. in 1955 and rose through the ranks to become Chief in 1963, a position he held until 1986. He also severed 3 terms as Chief of Department of the Pennsauken Fire Department. He was a member of Pennsauken Twp. Fire Chiefs & Fire Officers Assoc., the past president of Pennsauken Twp. Fire Relief Assoc., and a charter member of the Pennsauken Twp. Exempt Assoc. Blair was a life time member of the Camden County Fire Chiefs & Fire Officers Assoc., Camden County Firemen Assoc. and the NJ State Firemen Assoc. Blair's true passion in life was playing the banjo. He was a past member of the Pennsauken String Band in the late sixties, the Sterling String Band, the Dick Crean String Band, the Peter A. Broomall String Band, the Woodland String Band and the Gloucester City String Band. Relatives and friends are invited to the visitation from 4 to 8 PM on Sunday, September 25, 2016 at the Inglesby & Sons Funeral Home, 2426 Cove Road in Pennsauken, where a Firefighters Services will be held at 7:30PM. Interment will be private. In lieu of flowers, memorial donations may be made to the James David Hutton Memorial Scholarship Fund, C/O Jamie Zaremba, 441 White Horse Pike, Atco, NJ 08004. For more information or to e-mail a condolence, please visit www.lpwoosterfuneralhome.com.

The family of E. Blair Hutton created this Life Tributes page to make it easy to share your memories.

Send flowers to the Hutton family.