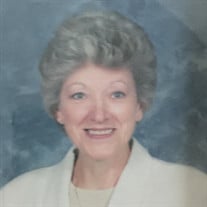 Dorothy C. Speight (nee Pflaumer), 85, of Pennsauken, passed away on November 15, 2016 at Cadbury Nursing and Rehab Center. She was born and raised in Philadelphia, PA. She was married to Charles L. Speight in 1950 and they raised their family in Palmyra and Pennsauken. She graduated from the Cooper Hospital School of Nursing in 1952. She worked as a registered nurse for 49 years in Camden and Cherry Hill before retiring from Ciell Institute in Haddonfield. Dorothy was a lifelong Phillies and Eagles fan. She was a charter member of Martin Luther Chapel in Pennsauken, NJ. She held many volunteer positions within the church and school for over 50 years. She was a loving wife, mother, grandmother, sister, aunt, mentor, caretaker and friend. Her legacy of faith and family will continue to live on in the hearts and minds of those who knew her. She was predeceased by her husband of 45 years, Charles Leonard Speight and a son Charles Leonard Speight Jr. She leaves behind a son and daughter-in-law Charles Robert and Karen Speight, two daughters Janet Duffy and Susan Creadon, nine grandchildren: Emily, Allison, Amanda, Laura, Elizabeth, Katie, Brian, Sarah and Jillian and six great-grandchildren. Relatives and friends are invited to gather for visitation on Friday, November 18, 2016 at Martin Luther Chapel, 4100 Terrace Ave., Pennsauken, from 7 PM to 9 PM. The funeral service will take place on Saturday, November 19, 2016 at 9 AM at Martin Luther Chapel followed by interment in Locustwood Memorial Park in Cherry Hill. In lieu of flowers, the family requests that donations be made to Martin Luther Chapel Christian Day School. To share stories photos or to send an online condolence please visit www.Inglesbyfuneralhome.com.

Dorothy C. Speight (nee Pflaumer), 85, of Pennsauken, passed away on November 15, 2016 at Cadbury Nursing and Rehab Center. She was born and raised in Philadelphia, PA. She was married to Charles L. Speight in 1950 and they raised their family... View Obituary & Service Information

The family of Dorothy Speight created this Life Tributes page to make it easy to share your memories.

Send flowers to the Speight family.