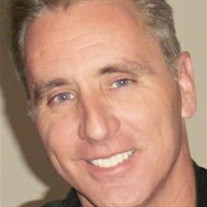 David Bradian, age 54, died Saturday June 4, 2016, after a three year heroic struggle with cancer. David is survived by his loving wife Caren Esquila Bradian and their four year old son Stephen. He is also mourned by his loving family, including his mother Patricia Bradian, sister Kim Gigliotti, her husband Ross Gigliotti and their sons Patrick and Dean. Finally, he will be forever missed by his brothers Peter Bradian and Stephen Bradian. David learned the ways of the world growing up in the borough of the Bronx in New York City. It was there that he began to forge relationships and a keen sense of perspective that would last a lifetime. While still in High School the Bradian family made its trek from NYC to Cherry Hill, New Jersey. David attended Cherry Hill High School West where he was a Captain in the Air Force ROTC unit in its first years of inception.After graduation in 1980, David attended various tech schools that scarcely broke the surfaceof his amazing talents. David Eventually took a position as a supervisor with KBR Corporation, a multinational construction firm, and worked at Camp Buehring in Kuwait during the Gulf War. After the war was finalized in Iraq, David was recruited by Fluor International, one of the worlds largest international design, engineering and construction firms. This position brought David to Afghanistan where he worked as a supervisor at Bagram Airbase. David was known for his ability to think through and develop an efficient and effective solution to any complex engineering or design problem. There was no obstacle too big or small that exceeded his mental grasp. Dave was multitalented. He was also a larger-than-life figure who captured the attention and respect of anyone within his orbit. If there was a celebrity on base, you can bet that Dave was at the center of the action. Numerous photos with two star generals, famous Hollywood actors and the hottest musicians in show business, can attest to Dave’s cult status on the U.S. military bases that he called home. He was also a man of great courage and compassion, once wrestling a whip out of the hands of a Kuwaiti who was administering an unjust public punishment to a servant. Lastly, David loved his country. He was a true patriot who inspired those around him to greater heights. Dave came into contact with workers from all over the world and never has there been a better ambassador for America. He was a bold American who wore it on his chest and in his heart. Dave did not exist on the periphery of life; he was the celestial center of a life fully lived. In his words: “Life is full of risks anyway, why not take them? A Memorial Mass will be held this Saturday at 10am at St. Peters Roman Catholic Church, 43 West Maple Avenue, Merchantville, NJ. To post a photo, share a memory, or send an online condolence to the family, please visit www.inglesbyfuneralhome.com.

The family of David Earl Bradian created this Life Tributes page to make it easy to share your memories.

Send flowers to the Bradian family.