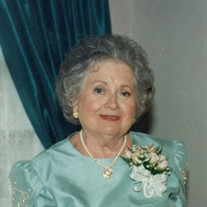 Charlotte J. Cuneo, nee Beck, 91, of Cherry Hill, passed away July 31 peacefully at home with family. She was born to the late Walter and Marie in 1924 at home in Camden, NJ with Claire, her identical twin. Charlotte, know to her family and friends as 'Chal,' spent her young adult life as a dental nurse. During WWII she diligently wrote her husband-to-be, Albert, who was serving aboard the USS New Mexico. Upon his safe return, they were married on November 10, 1945. They raised their family in Pennsauken where Chal served as PTA officer at St. Stephen's School. She enjoyed playing pinochle with her sisters-in-law, cherished spending family vacations in Avalon, and was an avid Philadelphia Phillies fan who attended several spring training's in Clearwater. Later in life, she moved to Cherry Hill. She continued to travel. In just the last few years, she attended the WWII USS New Mexico reunion in St. Louis, and, in 2015, vacationed at Walt Disney World. Even at the age of 91 she wasn’t afraid to jump aboard the Star Wars tour ride. Charlotte is predeceased by her husband Albert E. Cuneo, Sr.; brother, Walter Beck; sisters, Claire Forebaugh and Marie Wallace. She is survived by a brother, Milton Beck. She is also survived by her son, Albert Cuneo, Jr. (Heather); daughters, Linda LeNoir (Richard), Patricia Jann (Eric), Susanne Cardone (Michael), Nancy Kummer (Frank), and Maryann Cuneo; grandchildren, Ryan, Alexis, Allison, Kyle, Philip, Cassidy, Stephen, Michael, Lucas and four great grandchildren. Relatives and friends are welcome to Charlotte's visitation on Thursday, August 4th from 10:30am - 11:30am at the Holy Eucharist Church, 344 Kresson Road, Cherry Hill, NJ, followed by a funeral mass. Charlotte will be laid to rest at Calvary Cemetery, Cherry Hill. In lieu of flowers the family requests donations be made to the American Heart Association, www.heart.org, 1 Union Street, Suite 301, Robbinsville, NJ 08691-4183.

Charlotte J. Cuneo, nee Beck, 91, of Cherry Hill, passed away July 31 peacefully at home with family. She was born to the late Walter and Marie in 1924 at home in Camden, NJ with Claire, her identical twin. Charlotte, know to her family and... View Obituary & Service Information

The family of Charlotte J. Cuneo created this Life Tributes page to make it easy to share your memories.

Send flowers to the Cuneo family.