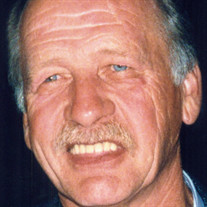 Charles W. Brecker, Jr., age 76, passed away peacefully on Tuesday, May 17th with his loving family by his side. Born in December 1939 to Charles and Bella Brecker. Charles lived in Parkside, Camden until the age of seven until his family moved to Merchantville /Pennsauken. It was at the age of ten when he met his life long friends Harvey and Norm where they were usually found running the streets. He attended summer camps every year at Camp Ochanickon where he found his fondness of horses. At the age of 18 he experienced a horrible car accident with his life long friend Norman where he received many facial wounds an lost most of his teeth. He went to Merchantville High School then Camden County Vocational School for paint decorating, which he didn't care for much, so he joined the Navy. Charles served our country in the Navy from 1958-1964 and retired as a Machinist Mate 2nd Class, which was the highest rank for a four year stint. First aboard the USS Robinson #562, then on the USS Charles F. Adams, which was a brand new boat for 6 months where he had the opportunity to live in Maine and found his new appreciation for lobster. He went on to serve two years with his brother John during the Cuban Missile Crisis of Pigs patrolling the coast line. After returning home from the Navy Charles worked at Jefferson Hospital, married in 1964 and had two beautiful daughters Debra and Barbara. In 1985 he met his loving wife Elaine and her three beautiful daughters, Camille, Shelley and Carly while working at the Navy Yard Power Plant. Then he retired and became a successful Realtor Broker and co-owner of Century 21 Alliance. Charles and Elaine moved to Florida in 2001 after experiencing the loss of their loving daughter Carly. Then Charlie worked in a funeral home, as a valet for a hospital and finally at St. Luke's Eye Hospital as a van driver, a job he truly loved. In 2013 they moved back to New Jersey where he spent time volunteering for Forgotten Angels Equine Rescue where he found true fulfillment. His other true loves were playing craps and his favorite "medicine" Drambuie. Friends and family are invited to celebrate Charlie's life during a Memorial Service on Saturday, May 21st from 9am-11am at Inglesby & Sons Funeral at 2426 Cove Road, Pennsauken, Inurnment will follow at Harleigh Veterans Cemetery with Navy honors. In lieu of flowers, please make donations in Charlie's name to Forgotten Angels Equine Rescue at [email protected] or mail to 288 Hartford Road, Medford, NJ 08055 and Vietnam Vets of America at VVA.org. To post a photo or share a memory, or send a condolence to the family, please visit www.inglesbyfuneralhome.com.

Charles W. Brecker, Jr., age 76, passed away peacefully on Tuesday, May 17th with his loving family by his side. Born in December 1939 to Charles and Bella Brecker. Charles lived in Parkside, Camden until the age of seven until his family moved... View Obituary & Service Information

The family of Charles W Brecker, Jr. created this Life Tributes page to make it easy to share your memories.

Send flowers to the Brecker family.