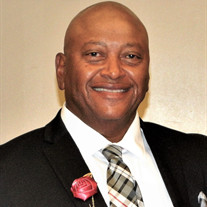 Brian Keith Monroe was born November 23, 1956 in Camden, New Jersey to the late James and Mary Monroe. Brian was the fifth child of five children. He was educated in the Camden NJ School System. As a young man he moved to Houston, Texas.... View Obituary & Service Information

The family of Brian Keith Monroe created this Life Tributes page to make it easy to share your memories.

Send flowers to the Monroe family.