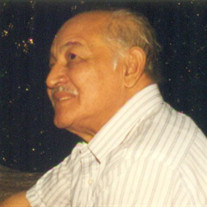 On December 16, 1924 Juanita and Marcos Lopez welcomed a son, Alejandro Lopez Morales. Born in Mayaguez, Puerto Rico, Alejandro was a spirited child, often drawing comparisons to Tarzan. He joined sisters Josefina & Mildred and brother Carmelo. Alejandro was gifted in many things but settled on Auto Mechanic at the vocational school in Mayaguez. He married Generosa Rivera, with whom he had two daughters, Carmen Socorro and Elba Nidia. In 1943, Alejandro enlisted in the US Army and served in World War II. He eventually reenlisted in 1950 to serve his country once more in the Korean War as a member of the decorated group known as the Borinqueneers, Company “F” of 65th Infantry Regt. 3 Bravo Division. On April 1, 1951, he was injured in Kaesong, Korea and was awarded the Purple Heart. With a total of 6 years of service to his country he was honorably discharged with many commendations including, the American Theater Service Medal, Good Conduct Medal, Victory Medal, 5 Overseas Service Bars, Korean Service Medal, Combat Infantry Badge, and 1 Bronze Star. After the army Alejandro became a Chicago business owner. Eventually he “retired” to Puerto Rico where he worked at the University of Puerto Rico in Mayaguez. After becoming a widower, Alejandro married Eugenia Rivera and raised Noemi, his late son Josue, and Veronica. Alejandro was not only a brave soul, he is fondly remembered as a Domino Champion, avid fisherman (once owning a beach house and boat), marathon runner, awesome baker/cook, talented craftsman, and our very own John Travolta on the dance floor. We also remember his will to live, fighting various health conditions stoically and with unwavering faith. Above all we remember his love and devotion to Christ. It was rare that he miss a prayer or worship service. Once he was unable to attend, Alejandro never stop reading the Word or singing praises. We all loved to join him in singing his favorite song, “Cristo me dijo que venia otra vez.” Alejandro’s love for Christ was displayed in his patience, kindness, and hospitality. Alejandro is survived by his sister (Mildred), wife (Eugenia), his 4 daughters (Carmen, Elba, Noemi, & Veronica), 3 beloved son-in-laws (Brad, Isaias, & Samuel), 1 daughter-in-law, (Sandra), 20 grandchildren (Carmen Bella, Luis Andres, Jr., Yvonne, Joanna, Marcos Jr., Diana, Natalie, Nathan, Isaac, Alex, Josue Jr., Richard, Josue Luis, Gabriel, Sheyla, Zoe, Caleb, Noah, Samson, and a baby boy on the way), and 17 great-grandchildren (Melissa, Roxanne, Lino, Lissette, Victoria, Jonnathan, Destiny, Carlos, Dianiliz, Jean Carlos, Keisha, Jan, Anthony, Jorialis, Jannelise, Mia, Emmanuel and a baby girl – Amariah Danielle on the way). Alejandro will be missed but he leaves behind a legacy of bravery, optimism, and faith that is comforting and inspirational to all. Alejandro fought the good fight, finished the race, and guarded the faith for which he will receive the crown of righteousness given by his Lord and Savior, Jesus Christ, upon his return. Relatives and friends are invited to attend Alejandro's visitation on Tuesday evening from 5pm-7pm at the Seed of Life Church located at 10 W. Maple Avenue, Merchantville. A funeral service will follow at the church at 7pm. Interment will take place with honors on Wednesday, September 7th at Brigadier William C. Doyle Veterans Memorial Cemetery, 14 Chesterfield Arneytown Road, Wrightstown, NJ 08562. Funeral arrangements have been entrusted to Funeraria Hernandez.

The family of Alejandro Lopez Morales created this Life Tributes page to make it easy to share your memories.