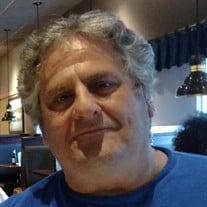 Albert J. Kinder, Jr., age 60, of Pennsauken, passed away peacefully on December 29, 2016. He was born to the late Albert J. Kinder, Sr. and Nancy Schaefer (nee Cheche). Albert previously worked as a truck driver for Falcon Express in Pennsauken. He was an avid Philadelphia Eagles fan and loved collecting antiques, going to flea markets and casinos, watching western films and racing cars. He was a jack of all trades who loved to help family and friends with all types of projects. Above all, he loved his family and spending time with them more than anything. He will be deeply missed. Albert is survived by his beloved wife of 42 years, Sherry Kinder; children, Amber Kreuter (Fred) Kristen Kinder (Joe) and Albert Kinder III (Amy); grandchildren, Ben, Alex, Nicky, Joey, Brandon; and siblings, Robert Kinder, and Nancy Hess and her husband Todd. Also survived by many loving family members and friends. Relatives and friends are invited to attend his visitation on Thursday, January 5, 2017 from 12pm to 1pm at Inglesby & Sons Funeral Home, located at 2426 Cove Rd., Pennsauken, NJ 08109. A funeral ceremony will begin at 1pm at the funeral home. Albert will be laid to rest at Lakeview Memorial Park in Cinnaminson. Memorial donations can be made to The Paralyzed Veterans of America. Feel free to post photos, share a memory, or send an online condolence to the family.

The family of Albert J. Kinder Jr. created this Life Tributes page to make it easy to share your memories.

Send flowers to the Kinder family.